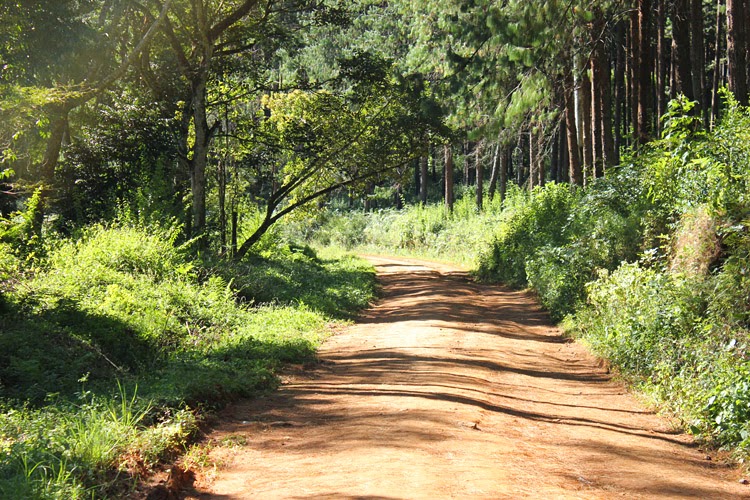 Monday
I spent today photographing on up on Zomba plateau. Zomba is about 35 miles from Blantyre, and it took about an hour and a half to get there. The plateau was eeriely like Falkland Estate in Fife where I regularly spend time photographing, because it’s covered by pine forest with dirt tracks. Every so often I was brought back to reality by seeing a tree fern, or exotic plant.
I saw my first ever wild snake today, and was impressed to be told that it was a black mamba, one of the most deadly snakes in the world! This would have been a very scary experience if the snake had been more than 25cm long. I thought it was a worm at first…
Tuesday
I taught a workshop today to women who have been affected by HIV. I’d been told that some of the women were very sick and had horrific experiences, so I wasn’t sure what to expect, and thought the workshop would be hard-going emotionally and very stressful.
It was the total opposite of what I’d imagined. The women gave us a fantastic welcome. They sang, danced and laughed all the time and the workshop was one of the most memorable experiences of my trip here. I’m not a Christian, but I saw how the group finds a lot of joy, strength, and support through their faith. It feels somehow ironic to me that these women who have been dealt such a hard life will praise God with such joy for what little they have.
Some of the women couldn’t write, but everyone managed, with a bit of help to etch a picture for me to take back to Scotland. It was an amazing, live changing day.
Wednesday
I taught my last workshop in Malawi today and we finished on a real high. The workshop was taught at Chimwmwe Children’s Centre to street kids in a village on the outskirts of Blantyre called Baluti.
The children have been through a really rough life, including many instances of sexual abuse and imprisonment, but they were so full of life and enthusiasm. The workshop was chaotic, noisy, and crazy, and really really fun to teach.
The pictures the children produced were fantastically well executed, with one of the most surprising coming from a 15 year old boy who etched an incredibly beautiful flower. I felt that teaching this workshop would create memories they would treasure, and that it provided them an exciting time-out from their troubles.
I got the impression that being part of this project will also raise their status with the other kids in the village, as some of the more fortunate local kids spent the workshop staring in through the windows to watch what was happening with the white people.
Fundraising for the Children’s Chimwmwe Centre is managed through Bill’s work colleague Amanda Fleet, and the Howe of Fife Rotary generously donated £6,500 towards a dedicated building for them. We were taken to the site of the new building where work has just started on the foundations. It will make a huge difference to these kids’ lives to have their own building
Thursday
The really exciting thing that happened today was that we filmed a famous Malawian musician for the scout’s film of the project. The scouts wanted some traditional Malawian music to feature as part of their film, so I asked my contact who runs the Blantyre Arts Festival if he knew anyone. I was expecting someone who plays part time at the weekend in bars for fun, not one of the most famous musicians in Malawi!
Ben Michael Mankhambawas amazingly kind to us, he played us one of his songs so we could film him, and gave us permission to use one of his properly recorded songs in the final film. It was wonderful to meet such a lovely person.
We also went to a tea tasting at the Satemwa tea plantation today. It was very interesting to learn more about how tea is produced and we enjoyed tasting all the different teas grown on the estate. It was surprising how different the different grades of tea taste. The green covered rolling hills of the tea plantation felt surprisingly familiar to parts of England.
Bill and I talked about western impressions of the landscape of Africa, and how I imagined Malawi would be like the wide, hot, African plains that you see on the TV. I’m still taken aback by how green and colourful this landscape is. Talking about the landscape of Africa, is like talking about the landscape of Europe. The Scottish Highlands are very different from the Dutch landscape, which is again completely different from the rolling hills of Tuscany. There is no typical landscape for an entire continent.
Tomorrow we’re back off down the hillside to the rift valley (about 1000m) to visit a sugar plantation and another wildlife park. Then on Saturday afternoon we start the long journey home. I can’t wait to see my kids again, but I’m very sorry to be leaving this incredible country. I hope I get to come back again sometime.