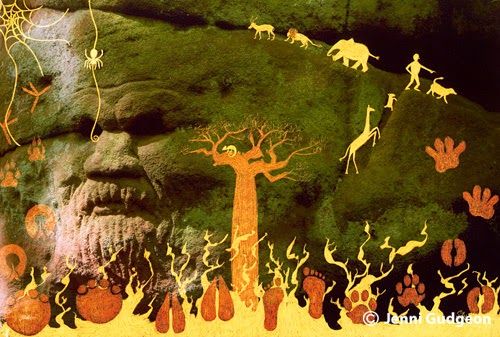 You might have heard in the news that Malawi have suffered terribly from floods in the last couple of weeks. More than 200 people have died and 120,000 people have been displaced. Blantyre has been badly affected, as has the Chikwawa district.

Chikwawa Primary School is twinned with Auchtermuchty Primary School, so I travelled there to teach workshops, and show the exhibition.

To order prints, please email me at jenni@redcabinstudio.co.uk

The base photograph shows a stone carved face in Dunino Den, Scotland. Dunino Den is an ancient and sacred pagan site where people still leave offerings of coins, ribbons and flowers. The den (meaning a small wooded valley) is full of carvings and strangely eroded stones.

The etching is inspired by the story of the Chewa Creation Story (The Chewa people are the largest ethnic group in Malawi, and Chichewa is the common language).

In the beginning there was Chiuta-God who lived above in the sky and below him was the earth, waterless and without life.
One day, the sky opened and the Chiuta-God, the first human pair, and all the animals descended onto a flat-topped hill in the mountains of Dzala-Nyama.
After their descent the soft surface hardened and turned into rock. The imprints of their feet can still be seen.
Plants grew, and God, men, and animals lived together in happiness and peace.
One day, man accidentally invented fire by playing with two twirling sticks. They warned him to stop, but he did not want to listen.
In the end the grass was set alight, and there was great confusion.
Among the animals, the dog and goat fled to man for safety; but the elephant, the lion and their companions ran away, full of rage against man.
The chameleon escaped by climbing a tree. He called out to God to follow him, but Chiuta-God replied that he was too old to climb. In the end the spider spun a thread lifting him up on high.
Thus God was driven from the earth by the wickedness of man. As he ascended, he pronounced that henceforth man must die and join him in the sky.
?
?

The base photograph shows the roof of the café at the Majete Wildlife Reserve, Malawi. It was taken while we were waiting for our lunch to arrive, and the lizard was so well camouflaged that I didn’t notice it till it was pointed out to me.

The etched tartan pattern is inspired by my family’s tartan of the Gordon clan (through my maternal grandmother). The colours aren’t matched correctly because of the limited palette while etching.

The base photograph shows the autumn colours of a plant in my garden in Dunshalt, Scotland. Its leaves are green during the spring and summer, but turn this glorious red for the autumn before the leaves fall off for winter.

The etching is inspired by the Malawian flag, which was officially adopted on 6 July 1964 when the colony of Nyasaland became independent from British rule and renamed itself Malawi. The rising sun represents the dawn of hope and freedom for the continent of Africa (when the flag was created, lots of countries in Africa were gaining independence from European rule). The black represents the indigenous people of the continent, the red symbolises the blood of their struggle, and the green represents nature.

I chose this photograph to etch my flag design onto because of the red, black, and green of its colours.

The base photograph shows a crab sitting on a layered and multi-coloured rock. It was taken on a beach near Pittenweem, Scotland. The stones in that area have amazing colours and shapes and I have photographed them many times.

The different etched patterns come from fabrics that my husband brought back to Scotland on his previous visits to Malawi. The picture was etched more than six months before I travelled there myself, because I needed an image to promote the project. I felt that these fabrics were the most tangible link to Malawi that I had at that time.

The base photograph shows a wall of chitenje’s being sold at a stall in Zomba market, Malawi. A chitenje is a garment similar to a sarong, worn by women. It is wrapped around the waist; used as a headscarf; or used as a baby sling. They are known by various names across Africa.

The etched figures are ceilidh dancers. Ceilidhs are Scottish social evenings where people dance to traditional Scottish music. The men usually dress in their tartan kilts, and the women add a touch of tartan to their outfits too. Women often wear flowing skirts which flare out when they spin around.

The base photograph shows the William’s Fall at Zomba Plateau, Malawi. The plateau really reminded me of Scotland, especially Falkland Estate, where I often photograph. The illusion was shattered occasionally when I saw a tree fern or heard a baboon.

The etching is inspired by the history of the stone of destiny, or stone of Scone (pronounced Scoon). This block of stone was used in the coronation ceremony of Scottish, and later English and British monarchs. There are a lot of legends and myths surrounding the stone, and it is believed to be the stone Jacob used as a pillow when he had his dream vision about a ladder reaching from earth to heaven (Genesis 28:10-22).

The base photograph features Falkland Estate, near where I live in Scotland. It is a beautiful, magical place that I have photographed for many projects. This tree always makes me smile because the branches look like arms.

The etched animals are copied from Malawian wooden animal carvings. Some of these are drawn from carvings that have been brought back from Malawi by my husband, but for others I had to cheat and find them on the internet.

The base photograph shows a thistle growing at the roadside, just outside Blantyre, Malawi. I saw the plant out of the window of the car we were travelling in, and the contrast between the blue of the thistle and the red of the soil was enough to make me shout out to stop so I could race back to photograph it. The thistle is Scotland’s national plant.

The etching is based on the history of the Scottish flag, which is called The Saltire. It is also the symbol of St Andrew, Scotland’s patron saint, as he is said to have been martyred on such a cross.

According to legend, in 832 A.D. King Angus led the Scots and Picts (northern tribes) in battle against the Anglo Saxons (southern tribes). King Angus and his men were surrounded and he prayed for deliverance. During the night Saint Andrew appeared to Angus and assured him of victory. On the following morning a white saltire against the background of a blue sky appeared to both sides. The Scots and Picts were heartened by this, but the Anglo Saxons lost confidence and were defeated. The Saltire has been the Scottish flag ever since.

The base photograph features a tree I found on Zomba plateau, Malawi. The tree’s shape reminded me of the dragon figureheads from ancient Viking longboats, and I spent a while photographing it to get the angle just right.

The etching shows a Celtic dragon and knot design. The Celts are a race of people from Scotland, Ireland, and other places, and Celtic knots are complete loops without any beginning or end. They vary in design from the very simple, to ones that are incredibly complicated, and have their origins in the mosaics of the late Roman Empire. They started being used in Ireland 1,500 years ago to decorate early Christian manuscripts and other artwork, and are still popular today.

The use of only one thread highlights the Celt’s belief in the interconnectedness of life and eternity. The constant interlacing under and over symbolises the physical and the spiritual crossing of paths, expressing permanence, and the endurance of life, love and faith.

The base photograph shows Culross Palace, Scotland (pronounced Cooross). The palace is a distinctive yellow colour which contrasts well with the red pan-tiles on the roof. Pan-tiles were brought back to Scotland as ballast on empty ships in the 17th century to provide cheap roofing material, and are a major tourist attraction in the coastal villages of Fife.
The etching is inspired by the Gule Wamkulu or Great Dance, which is practiced among the Chewa people living in Malawi. It is performed by members of the Nyau brotherhood, which is a sort of a secret society of initiated Chewa men. The Gule Wamkulu (pronounced Goolay Wamkooloo) is performed at weddings, funerals, the installation or death of a chief, and at the end of the initiation procedure to celebrate the young men’s integration into adult society.

The dance is symbolic as a medium between the ancestral world of spirits and the mundane present, and it conveys the spectrum of life’s emotions and actions.

The dancers wear costumes and masks made of wood and straw, representing a great variety of characters from the world of the spirits. Each figure plays a particular, often evil, character representing different forms of misbehaviour in order to teach moral and social values to the audience. The dance’s aim is partly to entertain and partly to scare the audience. Characters include wild animals, slave traders, spirits of the dead, and recent figures like the honda or the helicopter.

The Gule Wamkulu is thought to date back to the great Chewa Empire of the 17th century, and despite efforts of Christian missionaries to ban the practice, it has survived by adopting some aspects of Christianity. Nowadays Nyau societies, and the Gule Wamkulu, are still very much alive and Chewa men tend to be both members of a Christian church and a Nyau society. In 2005 UNESCO classified the dance as one of the 90 Masterpieces of the Oral and Intangible Heritage of Humanity.